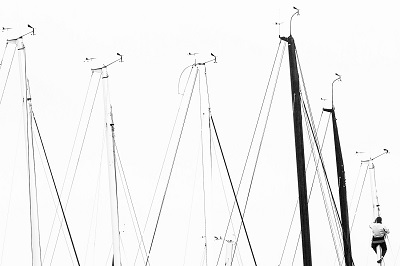 Preparing in the rain this morning - Andrea Francolini, MHYC

Racing is due to get underway in all classes from 12pm, both on the Harbour and just outside for IRC/ORCi, Farr 40, Sydney 38 and Sydney 36 classes.

Principal Race Officer, Denis Thompson gave his thoughts on how the day could pan out. “He and I are not on speaking terms today,” Thompson said, pointing skywards.

“The forecast has the weather all over the place, but it’s settling down. I think we’ll get 15-18 from the south, with passing showers and rain easing during the afternoon.

“All divisions will be sailing in their designated areas, but the race officers are out checking the offshore courses where the One Design (Manly Circle) and IRC boats (Macquarie Circle) will be sailing as it could be quite bumpy offshore. Safety is of paramount importance and if necessary, we’ll bring those boats to a Harbour course,” he said.

Middle Harbour Yacht Club offers breakfast each morning of the regatta, with a beach grill and sausage sizzle on the beach to follow racing each day.

The prize giving will again be held at MHYC on Monday evening (6 March) allowing all placegetters a chance to enjoy the evening with their crews.

Full results and all information at: www.shr.mhyc.com.au